Job Is Tough, But Rewarding 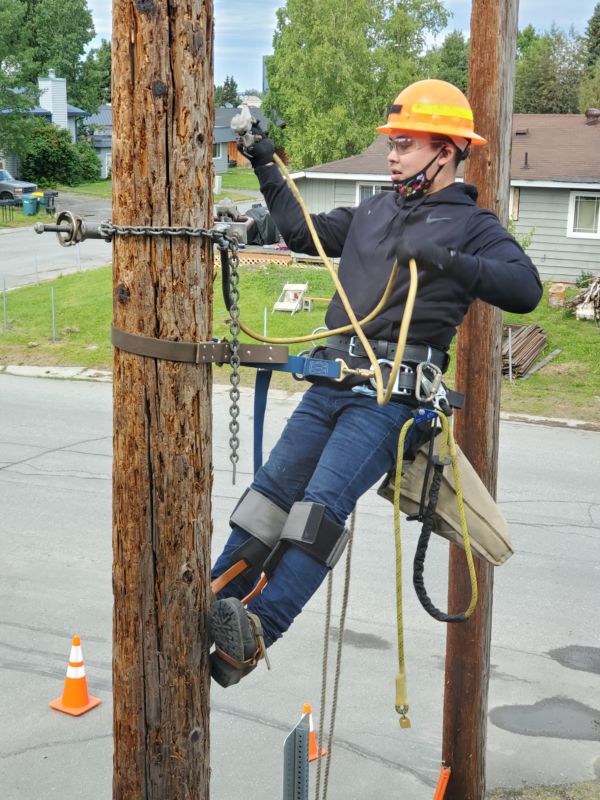 Without the convenience of bucket trucks, AVEC linemen work the old way, climbing poles and bunking at power plants when sent to villages.

When picking an Alaska Village Electric Cooperative lineman out of a crowd, look for a rugged individual. Often distinguished by their burly beards, worn pants and work boots, linemen tend to march to their own beat. Many have adrenaline-seeking personalities.
Line Superintendent Dave Johnson describes AVEC linemen as “somewhat of a dying breed in the industry.”
With the availability of bucket trucks and a move toward running lines underground, climbing poles is rarely used outside of school and annual training. But it is part of AVEC linemen’s daily work. The job requires mental and physical fitness.

“As an AVEC lineman, you’re going to have big calves whether or not you want them,” Dave says.
Climbing poles makes you realize you have muscles you didn’t know existed.

Dave began working as a lineman in 2000 after he was encouraged to follow in the path of his grandfather. More than a decade of experience working in rural Alaska gives him firsthand knowledge of the demanding circumstances of the job.

“You know what work orders need to be handled; however, outages and unexpected events often interrupt those plans,” he says.

When Dave became line superintendent in 2019, he became responsible for mapping out the crew’s work plans and travel arrangements, but always with the expectation plans likely would change.
Bankruptcy of a local airline and the COVID-19 pandemic presented new challenges. What was once a quick reservation process for scheduling flights required more coordination.

To get a lineman to the villages, multiple phone calls had to be made to ensure AVEC workers would be allowed to enter communities that sometimes restricted outside visitors. Delays were frequent due to pending COVID-19 test results and limited flight availability.

Pandemic precautionary measures are subsiding, but limited flight availability continues. Increased travel demand and fewer air carriers has made it more difficult to get crews where they need to go.
“What used to be a three- to four-hour trip became a three- to four-day journey just to get on-site,” Dave says.

It took three days and two overnights in Bethel and Aniak to get a lineman from Anchorage to Anvik.

With only a couple of airlines operating, and with decreased flight schedules, it is common to find all flights are full. Because of the nature of the work, it is nearly impossible to make reservations in advance. The primary focus for AVEC’s distribution division is to connect new services and perform scheduled system maintenance, which is what most linemen usually set out to do during their time in the field.
Storm damage requiring repairs must be considered when creating the schedule.

Safety is paramount. Line work ranks in the top 10 most dangerous jobs. Because of the risk of electrocution from working on live or hot wires, outages are usually scheduled to make repairs AVEC understands the inconvenience of losing power and tries to offer at least 24-hours’ notice to customers for scheduled outages.

Temperatures ranging from 100 F to 70 below zero cause the permafrost to heave—death for cables not designed to bend. Even the smallest crack in the insulation can allow electricity to short to ground, causing circuits to trip and equipment to break.

“It’s a delicate system,” Dave says. “AVEC is careful to protect the generators, which will shut down with the slightest indicator that something is wrong along the lines.”
This summer, AVEC has had a rush of failing transformers due to age, a load increase or a combination of factors.

Local plant operators act as the eyes on the ground, and are sometimes dispatched to troubleshoot and detect issues while a lineman travels to the village. An unqualified person cannot work within 10 feet of a live line. However, a plant operator can use a 40-foot hot stick to isolate lines and help track down the problem prior to the arrival of the lineman.

Linemen are prepared to be dispatched to a new location, but relocating to the next village takes energy. They unpack and repack everything they need: tools, clothing, bedding, food and other items depending on where they are needed. A lineman packs 400 to 700 pounds of goods for a four- to six-week stint.

“The seasoned guys tend to pack heaviest because they want to be comfortable,” Dave says. Living quarters at the power plant offer basic amenities, but housekeeping and meal preparation are not included. Kicking back and relaxing after a hard day’s work without the responsibilities associated with everyday life—like mowing the grass—doesn’t come without tradeoffs. There is a longing for home, family and friends.

But these guys know how to weather a storm and find the work they do to keep power on—climbing poles, installing power lines, extensive travel—to be rewarding. Despite it all, AVEC’s linemen love their jobs.